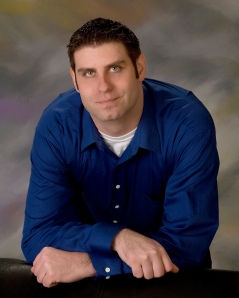 Corey M. LaBissoniere, a native of Houghton Michigan, which is located in the western tip of Michigan’s Upper Peninsula, is a first time author.

Corey is a graduate of Houghton High School, followed by his associates degree from Gogebic Community College and a bachelor’s degree in Psychology from Michigan Technological University.

Corey has always wanted to become a published author. He remembers his first short story was written in 2nd Grade. However, it wasn’t until after high school that he pursued his dream and started his first novel. He wrote about half the book, but then life’s obstacles interfered and he never got to finish. It was not until after years of busy college, work and a bad case of writers block when he finally returned to his novel (which, he adds, was still saved on an old floppy disc). Four months later, the ‘Land of Enchantas’ was born!

Corey is a member of Upper Peninsula Authors and Publishers Association. He has completed the sequel to his first novel; and is currently working on the third installment of the Enchantas series. Corey states that both sequels will be darker than the original ‘Land of Enchantas’.

Corey does book signings which can be viewed on this calendar. You can also view Corey on Facebook and Twitter.

When Corey is not writing, he works as an Adoption Specialist at a local Agency, enjoys a good game of billiards with his father, delights in extreme sports, likes outdoor activities, loves to travel and appreciates a good story. Corey resides in Houghton Michigan with his fiancé Chandra Murrell.